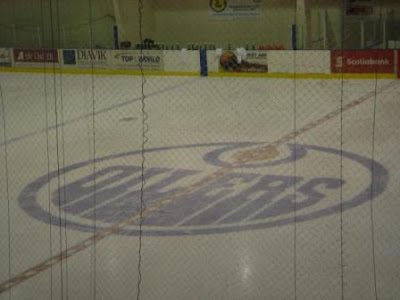 Thanks and recognition to the Oilers rookies, coaches and management for bringing the rookie camp up to Yellowknife.

The team was very active in the city the last few days and it was nice to see Oiler blue popping up everywhere I went. A lot of kids got to see their heroes, or at least young replicas of such, and I can tell you truly - heroes are a wonderful thing to have.

The Oilers also took the time to honor Shorty Brown. A local hockey icon and a class act if there ever was one I will try to post something, specifically about him, at another time.

Oh yeah - some of the local refs got to officiate the scrimmages. They didn't call too much but from where I sit: 'Who cares?'. Really. For those guys this must have been like their very own day with the Stanley Cup. Almost brought a tear to me eye it did. Couple of my buddies are hoping it doesn't go to their heads but all agreed - it was pretty freakin' awesome regardless.

This first post will cover the basics while the second post will cover what I actually saw. My main interest will be to watch the practices and the scrimmages. So don't go expectin' no fancy scoutin' reports or nuthin' like that. For what it is worth I will give you my opinion on the players at hand and what I think can be expected of them in the future.

The rest of the guys listed are, pretty much, scrubs; there to fill the roster so full scrimmages can be played. Note that some of them are already assigned to certain teams: Stamler (Oil Kings) and Huxley (Springfield) among others.

Again, the second post directly follows this one. Oddly enough the third and final post in this series (the summary) is directly above this one.

Have a great evening everyone.
Posted by YKOil at 20:20 No comments: 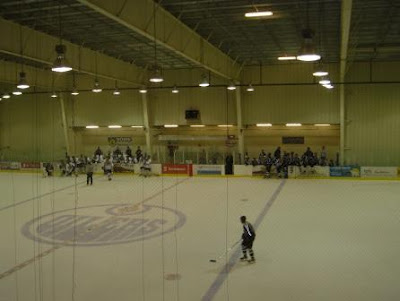 I was there for all 3 days. Typical set-up was to have one-vs-one drills until 10:00am (or so) followed by half-ice line-up drills (forwards vs. defense) until 10:30. After that the ice was cleaned off and the scrimmage would take place.

Bisaillon - A cut above most of these guys when it comes to skating, passing and puck possession.

Cogliano - Speed advantage is obvious but he didn't do much with it. A lot of solo work in his game but it isn't like Reddox and Rohlfs were giving him much to work with.

Kyntar - Spending a lot of time thinking the game. Not a floater by any means, you just hope he starts to think less and do more at some point.

O'Marra - Like Cogliano you can tell he is more skilled than most here. Also, like Cogliano, he really didn't get anything done today imo. My notes do say he had a good last 5 mins.

Peckham - Strong guy, never saw anyone outmuscle him really (also liked how he stood Kyntar up at the line on one one his shifts). All higher end skills need work (passing, positioning, etc).

Quist - Big Swede has game. Really. Like Kyntar he took a bit to get his bearings but once he did he was fine. Will dish a hit and will take one. Not afraid to shoot but not a puck-hog either. Has a knack for making himself available for a pass without being a floater. Handles the rough stuff well.

Reddox - Invisible all game except for a great shift right near the end of the game.

Spurgeon - Best player on the day. Outstanding hustle. Thoreson's Canadian clone. Opportunistic on offense and first guy back on defense. Great on the boards and buzzes the net. Leads his line. Scored both goals. Everything I hoped O'Marra would be.

Young - Best board control I have ever seen at any level below that of NHL calibre play. Skating was better than I thought it would be and he played a simple, effective game through-out.

Almtorp - I think this guy has been winning a LOT of face-offs.

Bisaillon - Laid out some nice hits today. Nice surprise for me given I saw none of that yesterday. Really wiffed one clearing attempt.

Contois - Won't have a big league career but let it be noted here that he works his butt off out there AND he knows when to cut in front of the net (not his own) and make chaos.

Cogliano - Still has the speed and still not doing much BUT he is starting to use what he does have more effectively to my mind. Broke up a couple of plays going the other way (nice to see he knows how to play defense).

Huxley - This guy was hilarious. Had a horrible, HORRIBLE practice but then had a pretty good game and THEN had a GREAT shoot-out goal at the end. He was entertainment writ large all morning.

Kyntar - Began to show better the second day. Being less tentative really does help. Who knew? Nothing else of note to note.

McDonald - Showed some real patience (as opposed to indecisiveness) with the puck in the offensive zone. Took part in a nice 2 on 1 break (with #37) but no one scored.

Peckham - Some nice board work but some guy blew right by him when there is no way he should have so that worries me. Strength needs speed.

Quist - Finishing his hits and I liked that he didn't back down when challenged.

Spurgeon - Continues to impress with his speed and hustle. Has not backed down from anything. Ever. Nice.

Young - Steadiest hand out there by a mile. Has started to general the other players. Guy is oozing leadership.

Bisaillon - Love this guys skating. Sweet check of Quist over the boards and into the bench. Some nice puck carrying out of the defensive zone.

Cogliano - Couple of assists but more importantly... I think he won a face-off. Accomplished nothing while on the PP.

Dubnyk - Great stop on Almtorp and a really nice save on a Kronschnabel tip.

Karamnov - Nice little chip-in for one goal but lost another because his wind-up was so overdone he lost the shot altogether. Best flash on the ice though - his passing and puck control skills are obvious.

McDonald - Had one REALLY nice pass out from the sideboards. Showed some hustle, some grit and some brains on the penalty kill. Had a great day.

Quist - Finishing his checks and really starting to make his presence known BUT he also seems to try to play a bit of a floater's game - waiting for loose pucks, etc. The problem is that he should be physical FIRST and then opportunistic. Not the other way around. He just doesn't appear to have the speed, puckhandling or shot for that kind of game.

Reddox - Glad he decided to join us. Scores twice and was buzzing all game.

Spurgeon - Breaks up one play and is first into the offensive zone to follow up. Other team gets it out but Spurgeon is there to break it up again; this time he carries it out himself, drives the net and is stopped by #76 (Young). GREAT sequence of play to watch.

Trukhno - Passes to Almtorp on the breakout... too bad Almtorp was surrounded by opposing players and entire cast of 'Lost' at the time. Bad. Bad. Bad.

I would be remiss if I didn't report that one day there was a lady, just a row down from me, who:

a) had a hell of a rooster tail going on,
b) had passed the 'bad hair' gene onto her kids, and
c) needed to cut those nails of hers 'cuz they made me and the buffalo nervous

Between her and the 'Splooging Oil Zamboni Of Doom' they drove out on the ice at the half-time mark of the scrimmage I was REALLY missing my camera. Cute and fluffy bunny she ain't.

Final notes (a summary of sorts) are posted in part 3.

Have a great evening everyone.
Posted by YKOil at 23:56 No comments: 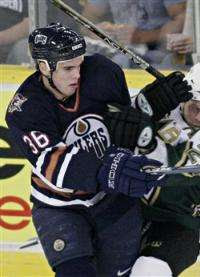 August, it turns out, was an okay month to take a vacation from blogging. Maybe I should have warned ahead of time but I did not so... sorry.

I was on a vacation in Quebec City a few years ago and, while on said vacation, I discovered a few wonderful truths.

Our latest 1st round draft pick, as at that time, would become a very good NHL player.

My friend David, whom I was visiting, took me to a Quebec Remparts game. Before the game he, and his friend Sabas(tien), taught me the two French words I absolutely HAD to know in order to enjoy the evening fully:

That taken care of we proceeded to watch the game.

The main names on the ice for the Remparts were... well... no one memorable apparently (though I think that Hennessey was on the ice that night). Playing for their opponents, the Rimouski Oceanic, was Marc-Antoine Pouliot and the high-scoring pairing of Crosby and Roussin.

I remember five things from that game:

1. The Remparts goalie played pretty well
2. Roussin wouldn't be a player
3. Crosby was farkin' spectacular and would be a superstar
4. Oceanic powerplay passed the puck around too much
5. Pouliot was the only guy on the ice who could play with Crosby

Crosby enjoyed playing with Pouliot. Pouliot was/is a player and Crosby knew/knows it.

Now, I could get into the stats like Lowetide does in some of his posts regarding this subject but I will not.

Marc-Antoine Pouliot will be an effective NHL player who should become the equivalent of a poor man's Ron Francis.

He has that talent.

I saw him good.

I will be posting, soon, on the Oilers Rookie Camp up here in Yellowknife (hence 'YK'Oil). Have a great evening everyone.
Posted by YKOil at 16:31 3 comments: