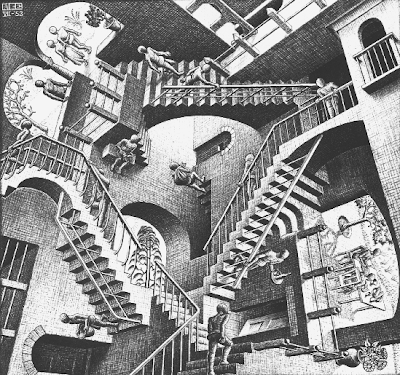 In the comment section of the post titled "Can't Have It Both Ways" (directly below this one) Gord's summation is, essentially, that I am saying the Oilers have no plan.

I think they do have a plan, I just don't think they know what it means nor how to implement it.

See, the Red Wings are the kind of team where any non-contrarian observer can honestly say that:

"The Red Wings should make the play-offs."

The Oilers however are the kind of team where a large number, maybe even a majority, of non-contrarian observers can only, honestly, say that:

"The Oilers could make the play-offs."

In the same way, the Kings are the kind of team where any non-contrarian observer can honestly say that:

"The Kings have enough top-end young talent that they should be one of the next top-teams in the NHL."

The Oilers however are the kind of team where a large number, maybe even a majority, of non-contrarian observers can only, honestly, say that:

"The Oilers have some nice young talent and they could one day form the core of a top-team in the NHL."

Again, one could say that:

"The Blackhawks are the kind of team that the loss of any two of their top three forwards (lets say Kane, Hossa and Toews) could prevent them from making the play-offs."

"The Oilers are the kind of team that the loss of any two of their top three forwards (lets say Horcoff, Hemsky and... ummm... Visnovsky? yeeesh) should prevent them from making the play-offs."

The differences in reality and perception are staggering when you work your way through it. Only the requirement to play games, wherein luck CAN giveth without taking away, saves the future year for this team.

Obviously, the Oilers have executed a plan. So to speak.

My problem for me, beyond that of following a team constructed in a fashion wherein the results are consistent with that which one would get from a blind and thumbless monkey working with a pail of lego**, is that I don't really know what my plan would be to fix it.

This season can be saved. Swallow a salary or two, sign Hilbert, one from the Malhotra/Betts tree, get another veteran defender and keep Strudwick off the defense... and VOILA! The Oilers should make the play-offs.

But that isn't going to happen, and so the combination of coach approach and luck will have to suffice. Other teams have done so with less so all isn't lost however it does obviate the obvious.

It is only a fix for this year.

1. fewer stupid teams (Snow is better than Milbury and Toronto may finally have a plan);
2. fewer teams with the Cap and budget OR plain old budget space to work deals with; and
3. there has been no evidence of Katz being willing to blow substantial dollars on salary swallows

Options get limited quick when ego, stupidity and money aren't wandering around hand-in-hand.

A couple of extra points:

a. All that talk of a d-man going to Columbus for a forward is just silly, so please, stop it. What we would really want they probably won't give and a one-for-only complicates our surplus forward issue (please re-read points made, #1 through #3, above).
b. Any talk of unloading a front-loaded salary for a Cap/budget exchange is also silly. Stop it. Main issues being - most of front-loads the Oilers have don't supply the Cap pay-off needed to make it worthwhile AND getting to the Cap floor isn't THAT hard

It all makes me think a long term fix is a long ways off.

Now, despite my protestations, the Heatley deal (if he had deigned to come to Edmonton) may have helped IF it had been:

At least he would have given us the third piece of a French Connection-lite line and with that in place, with Cogliano, Gagner, Gilbert and Grebeshkov there is some hope that, short-term, this team should be a winner.

As well, one could hope that Souray, et al could have been turned (in time) into other pieces that would have matched the younger core better and maybe a champion could have been developed from that.

However, five assets IS a lot to give up. No question about it.

Lacking the means to pick up an asset like Heatley there is still some hope that the Oilers could make the lateral moves that still remake a team. Movement in that fashion is harder than it looks (I say without actually knowing), because the first demand of that kind of a remake is this:

Even were a team willing to trade a worthwhile asset - are the Oilers honest enough with themselves to take a slight step back (i.e. trade Souray or Visnovsky) in order to make a big step forward a year or so later?

I am not talking rebuild here. Just straight up maneuvers.

To answer my own question: No.

The Kahbibulin signing really does tell you all you need to know.

So if one takes fortuitous circumstance and good planning off the table then all one is left with is stupidity and luck.

I don't see this management team having the wherewithal to benefit from stupidity so that leaves luck.

But they don't know that. And what they made is something wherein they can't really see the real faults in it.

If the Oilers manage to avoid serious injury to any key parts (Horcoff, Hemsky, et al), have their young players continue to develop (Gagner, Smid and Cogliano) apace, get the season they need out of their older players and have someone step up and take on the defensive responsibility commensurate with leading a line (like the 3rd line for instance) and anchoring the 2nd penalty-kill unit then I can honestly say:

The Oilers could make the play-offs.

** Does that even make sense? Wit be not my friend this harrowing eve.***

Have a great evening everyone.
Posted by YKOil at 19:21 4 comments:

Can't Have It Both Ways 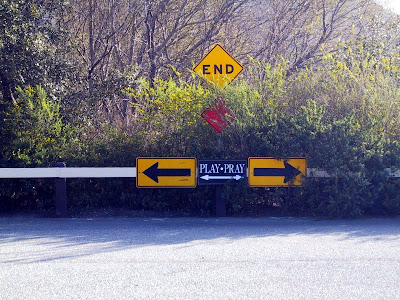 We's a funny bunch of humanity.

Think about the Chris Pronger trade for a second.

If that trade is about the 'now' then there is no way Ryan Getzlaf isn't part of that equation. Even if it is done Iginla style: i.e. Pronger for Getzlaf straight up.

If that trade is about the 'future' then Bobby Ryan and Ladislav Smid are your two must have targets and if you can get a 1st round pick to round out that package you take it.

And you make Brian Burke make that choice.

But when you try to have it both ways then you get less. Plain old less.

Of course, as free-thinking people, it is our right to double our fun. Think about the Smyth situation for a second.

If you aren't going to trade him then you sign him. Early. Even if at a slight premium.

If you are going to trade him then you hold an auction and get the best package out there.

But to go into a negotiation, without time or leverage, having acted in a manner that says you kinda-wanta-but-maybe-not-so-much, then maybe, just maybe, acting as if you are the one holding the gun is a bit much.

Which is how one winds up with a package of Nilsson, O'Marra and a 1st instead of a guy like Okposo or some other worthwhile asset from another team that BID HIGHER THAN THE ISLANDERS.

Trying to have it both ways. Maybe not so good.

And it isn't just about the trades. Think about the product for a second.

If it's about being competitive 'now' then veteran players get signed to fill holes on defense, or on the forward lines, or wherever you need them to play.

If it's about developing a team for the future then none of Smid, Gagner and Cogliano play when they did. And Penner and Souray don't get signed.

Think all that through real careful like. Go deep.

Say Pronger gets traded for Bobby Ryan and Ladislav Smid and a 1st (which is still #30) and say the team dedicates, right then and there, to a rebuild situation. Not a liquidation per se but no half-measures either.

Tjarnqvist is still a probable signing but does Roloson get a 3-year deal? Maybe Roloson does. Hard to deny the heroes so lets say that everything else remains the same

that Smid is played as a call-up (or stays in the minors another year) and if Smyth isn't signed then he is traded for 'best' package available. We'll call that package 'Okposo' equivalent.

With the season more or less playing out as it did the team is down a Plante but up a Ryan and an 'Okposo'.

Getting a little more speculative now but lets say that in 2007-08 Smid plays his first year and Gagner and Cogliano do not. Pouliot gets full play (for better or worse) and a couple of Sanderson's are playing in place Nilsson and Penner.

Does Souray get signed (better question - does Horcoff? I believe he would actually but you may think differently)?

So where does this team end-up in the draft? Worse than the Blues and Islanders but not as bad as Atlanta? Is Luke Schenn now an Oilers draft pick?

Finally we get to the end of the 2008-09 season. Gagner and Cogliano have played their 1st year and maybe even Ryan and 'Okposo' have as well. Regardless of how well they do that is an awful lot of rookie minutes to shelter. If Souray isn't signed a couple of years back then odds are good we finish below LA and maybe even Atlanta - is Braydon Schenn now an Oiler prospect?

And it didn't take incredible leaps of logic (timewarps aside) to get there.

Reverse it all and think of what coulda woulda shoulda if this team had gone the competitive route (Getzlaf, Smyth signed at $4.75 million when he should have been, Glencross on the team, etc).

EITHER WAY - it is better than what we have now.

You Could Be Screwed

Which is where we are now I think. This team, as constructed, could make the play-offs. 'Could' is not spelled 's-h-o-u-l-d' in this case however and that is the essential problem with trying to have it both ways.

The future is bright, but not so bright I gotta wear shades, and the 'now' is overpriced and 'iffy' competitively. Hell. Our future will be overpriced too.

You want to know what the most interesting thing about the Heatley saga was (did he send Patrick Kane a 'thank-you' note btw?)? For me it was Bryan Murray pushing the Oilers to the point where the package for Heatley included Cogliano.

Somehow I think that were the roles reversed the Oilers would have accepted Nilsson instead of Cogliano in the package.

Which would have been a package I could live with.

Because I wanted it both ways. Or perhaps I knew I could not.

Have a great evening everyone.
Posted by YKOil at 00:54 5 comments: