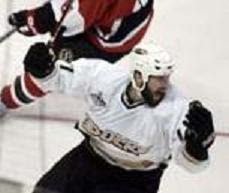 I have a great many concerns about the Penner offer, most of them having been covered by Lowetide (who is not taking this one well) on his blog. mc79hockey, PunjabiOil, IOF, BDHS and CiO also chime in (links to the right).

I am a little more ambivalent on it. Penner does have potential and does seem a natural fit for a passer like Hemsky. He isn't as good as Torres is defensively BUT he hasn't played as many games either. It is easy to point at Penner's age but his NHL hockey age is still just one.

The Penner offer is fraught with peril imo but the pay-off could be astounding. My hope is that he either

a) hits expectations or
b) is unloaded in a timely fashion should he development stall.

A big, BIG guy who is a force at the net or on the boards and who is a shooter first, last and always

Oh just WHAT will he be when he grows up?

One thing though. And I will not say it again. Anyone who thinks this was just a grand plan by Lowe to force Burke's hand and cause Anaheim budget and Cap troubles isn't being rational.

To be more blunt about it: shut the f%^k up.

Anaheim currently sits at $48.80 million in committed Cap salary with 21 players on the payroll. That is 12 forwards, 7 defensemen and 2 goalies. Selanne and Penner are not included in those numbers but Ryan is.

With the Cap at $50.3 million a quick look at the Ducks roster reveals that the team has the following flex:

* Hillier has a big signing bonus so Burke would have to send him down and get a 600k man to play back-up. ** Selanne isn't counted in the $48.80 so I don't count him in the above.

Other than Neidermayer's contract Anaheim doesn't have a lot of flex to play with. Most of their players are priced appropriately to, or even outperforming, their contracts. Many are critical to team success and a few would be hard to trade regardless (Bertuzzi).

Ergo 500k, to the Ducks, is a LOT of money. Neidermayer being the wildcard.

Ryan's contract will cost the team ~ $2.2 million in Cap.

So we know two things:

1. Lowe wants to sign Penner and he thinks he is worth $4.3 mill /yr,
2. Lowe was bidding against himself.

Look at the numbers again. No way was Penner going to get any real money out of Anaheim. They couldn't afford it. Burke is practically banking on Neidermayer retiring - he can't afford to keep the team together otherwise.

Look at the numbers again. Lowe had a $1.15 million spread to work with and he went 800k above the minimum - a minimum that Penner would not have seen from Burke. At least not this year. Lowe was, to say it again, bidding against himself.

Look at the numbers again. If Lowe had wanted to whip out his Sword of Damocles and begin busting Burke with it his best bet would have been to get Penner to sign at $3.8 million. At 3.8 Burke can keep Ryan in the minors and work flex to keep Penner.

i.e. At $3.8 Lowe makes Burke sweat as the 'right' decision isn't also the obvious one.

At $4.3 Penner makes more than Hemsky. I will leave that right there. On a secondary point, it is also more than Anaheim can afford sans knowledge of Neidermayer's plans. Look for Burke, and quite rightly so, to not match the offer.

Best of All Worlds and Finale

At $3.5 million it is still a tough pill for Burke to swallow as Getzlaf and Perry are due next year and Cap space will be at a premium for this team for the next few years.

Meanwhile Lowe keeps the 2nd round pick and protects himself in the last 3 years of the deal (as Penner would be easy to unload to a small budget team that has the Cap room but not the money).

A win-win deal for Lowe all-around.

At $4.3 million however... the risk is ALL on Lowe. And that is the problem

This contract offer does not represent Lowe at his finest. He paid high for a player who would have been lucky to break $5 million as an UFA and committed long to a guy with one season played and no obvious superstar skill sets.

In his last RFA season Penner would have been lucky to get $2.0 million out of Burke on a one-year deal and I can't see Burke breaking either the $4 million or the 3 year barrier on a longer term deal. Burke holds onto his wallet hard.

Much like the Souray signing Lowe failed to manage his risk. Penner has to be the real deal for this contract to represent value. He has to. Otherwise Lowe:

Here's hoping Burke matches the offer or that Penner really is the next Bertuzzi. Otherwise we's in trouble.

Heh. I started this post as kind-of ambivalent about it all... oh well... at the least I can appreciate watching Lowe play the role of RFA spoiler.

Have a great evening everyone.
Posted by YKOil at 19:40

Lowe's plans are built on nothing but desperation. It's a true recipe for disaster.

Fantastic breakdown of the finances of the deal. I hadn't read this until you and LT just spoke in his comments, but you just got onto my bookmarks.

A nuanced, balanced analysis of the situation.

This blog is certainly a good addition to the Oiler "blogosphere". And that's saying something.

I agree with you, BTW. This is Lowe taking a big swing at a bad pitch. If he connects, it may go out of the ballpark, but...