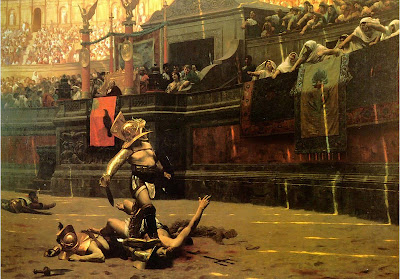 Anyone who has ever visited here knows that timeliness, at least in terms of writing, is not my strong suit.

The current trend in blogging - had that down cold over a year ago. Just not a word of it here (though to be fair I do have a draft version dating some time back saved here).

This time I am going to get my thoughts down now. Which is to say: the Edmonton Oilers suffer from serious group think. This is not a team that can think originally or independently anymore.

Craig MacTavish is, imo, an excellent coach who has only ever had three serious flaws (again, my opinion), in order:

1. Can't coach a powerplay to save his life

----- (every year) the personnel is never good enough?

2. Toes the company line too often

3. Plays to his favorites and his whipping boys a bit too much

There is no way Ted Nolan would have sacrificed a full 20+ games to Cole playing LW, Smid sitting in favor of Strudwick, Pisani playing at center and Gagner getting mouthfull after mouthfull of hard minutes. After 6 games (8 tops) he would have done what any reasonable coach would have done:

I do not say all of that to blow sunshine up Nolan's ass. (Nolan saw it as his job to win games. Period. Hence, when Snow and Wang wanted development and didn't get it guess who got fired?) I say it to make the point - MacT has blown a large chunk of the season doing exactly what the team asked him to do: try to spin gold from what, it turns out, may be only be pyrite.

We know that MacT is a good bench boss. His history proves it. Something is not right here.

Every year this team has an obvious hole in the roster. Every year, except for late in 2005-06, it goes unfilled.

Every year this team has a sub-standard power play. Every year.

Those items are all items of management. And this year it is coming home to roost.

Because this team doesn't match the coach. Make no mistake folks. I am pinning the overall blame on Lowe. I don't think MacT has lost the room - he never had this one.

To change the metaphor a bit: He just doesn't have the tools and the ones he does have he has been asked to use in ways he would not normally do so.

Like trying to drill into concrete using a regular drill.

Like trying to use Pisani, RW stalwart extraordinaire, as a center for the first quarter of a season.

But if all you are given is a regular drill, or in MacT's case, a bunch of overwhelmed younglings, then maybe you pick the best drill you have and pray for the miracle you know won't come.

Concrete being what it is anyways.

And so we have a team that looks good on paper, Cole and Visnovsky are great players and Souray is playing at an all-star level, but it all falls down when it is all put together.

Which brings me back to the first point.

A team which has forward thinking management would not be making these mistakes. For all the great potential Cole has he would not have been brought onto a team which has no where for him to play.

A team which has independent thinkers in management would not have watched Stoll, Reasoner and Glencross leave, without adequate replacement, without someone yelling to the highest heavens - "THIS IS NOT ACCEPTABLE".

A team which has results orientated managment in place would not rely on the same tacticians, every year, to run the same incompetent powerplay - at the very least new brains would have been brought in to work with the existing ones.

A team which has capable management in place would not watch its penalty killing units degrade to the point of uselessness without rectifying the situation long before it got chronic... or even fatal.

A team that says it's goal is to win would use its resources in that way. Win first. Experiment and babysit later.

A team that has too much groupthink on the otherhand... well that team had better hope for a miracle because this season will bleed MacT dry by the time it is over.

I'll miss MacT. I really like him and I think he is an excellent coach.

Had a trade thought the other day:

Have a great evening everyone.
Posted by YKOil at 22:35

YK - great to see you back at it. Have always found your writings filled with lot's of great stuff and this one is no exception.

I think you (and Jonathan) have absolutely nailed the issues with the Oilers. To all those who say the problem is MacT has lost the room, I say they don't get it.

It's a team that's built to win on paper but is missing the heart necessary to make things happen when it counts. To wit, only when they fall way behind do they show the necessary urgency - but that's fools gold because you can't show up for 20 minutes and expect to win consistently in this league.

There are a few warriors on this team - MacT type guys who lay it on the line. Some of them can still bring it and others have obviously lost a few steps.

There are also a lot of kids who show great potential and great frustration (from shift to shift it seems). That's what happens with 19-23 year olds and when half your forward lines are made of this kind of player.

And then there are a bunch of passengers who've replaced guys that MacT can trust who simply do not deliver (either because they lack the heart or just don't get it). It's not hard to pick these guys out.

I've come to change my mind (a little anyway) regarding MacT only because I don't think you can blame him for the mess that is this roster. The man can coach, he can motivate but I don't think it's possible with this way this team is built either.

That being said, it may well be that the Oilers have no other choice but a change behind the bench because it's become almost impossible to make a trade due due to the cap situation (not just this year, but 2 years from now). And that would be a shame because MacT in essence is paying the price for mistakes that KLowe has made with the roster.

To those who think bringing Schremp back might help - I disagree. It's yet another kid who has good things and flaws. It will not help the PK and while it might help the 2nd line, it would have to go for the soft minutes only because it will get burned just as often.

With today being the last day for any moves before the roster freeze, I don't expect anything to happen and so we're left with a team that's a mess right now and no solution in sight other than to force someone to fall on a sword for the mistakes of a friend. A sad day indeed.

More Grit & More Scoring
That's what getting Cole was about.

Losing Reasoner? With Cogliano, Gagner, Nilsson not likely to provide more grit anytime soon, Reasoner had to go to make room for some.

Trade-for idea:
He's gritless and injury-prone.
He's fast, skilled and can win face-offs.
He's a UFA in July.
Can he be had cheap?
Healthy, he'd take a tonne of pressure off Horcoff.
His name is Tim Connolly, and
he's a Buffalo Sabre

Thanks od: there is no question about it - team management has been trying to have it both ways for far too long.

Teams are either (generally): rebuilding or serious about Cup contention - trying to have both worlds in play is a recipe for mediocrity if not outright disaster.

Lowe's bets went bad. The problem I have with them is that the risk impacts didn't have to be so dramatic in nature.

Mr. D: Reasoner WAS a grit player for this team. So was Glencross. So was Stoll and Greene for that matter. Cole is a nice pick-up but he can't play ALL the minutes those guys did.

And he can't take face-offs.

As for Connolly - like the player but hate the injury history.

Great to see you back