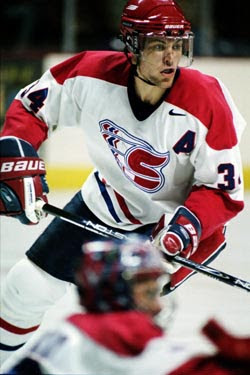 Some commentary given the action so far:

From my previous post: "...if a team can get him signed to deal in the 2.00 to 3.00 range (years vary with price) they will be very happy with their investment."

They pay a lot more than they should have imo. At $3.35 mill/yr or so, for a guy who will be 37 yrs old by the end of the deal, the team is paying for one year of full production and two years of declining production.

From my previous post: A smart team will see through the smokescreen, sign Ryder for something in the 2.25 to 2.75 range (I expect 2 to 3 years) and find that, with more powerplay time, they made a good move.

Wow. NOT smarter that the average Bear.

IF he does rebound they only get him for 3 years and if he doesn't they have massively overpaid him. Their only hope to win this contract is that he scores 50 pts next year and never gets better OR they win the Cup - but that is always the way isn't it?

And some smart team did. Good signing by Pittsburgh.

He got way more than that. As with the Stillman deal, given his age and other factors it is hard to say that Pandolpho will earn that 3rd year on his contract. $2.50 a year for 2 years would have made sense but... well.. gotta pay to play I guess.

From my previous post: "This year he gets his money. Good for him. Anything under $4.50 mill /yr is a good deal for the team that gets him."

And he did get his money. And then some. Good for him and bad for the Rangers overall roster and salary management.

From my previous post: "...even playing for Hitchcock he was still only middlin' effective at evens. I expect him to get $4.50 or so a year and I don't know if he is worth it."

Pretty much what I expected. The saving grace is that if he is worth it then they have him for 5 years. The risk was all on them (the Thrashers) anyways.

Flames sign Vandermeer for,what looks to be, $6.90 million over 3 years.

From my previous post: "A smart team locks a guy like Vandermeer up for 4 or more years in the $1.35 to 1.65 range. At that price point, in the right roster spot, he will be a very effective player."

First of all I would like to say that I wish the Calgary Flames the best of luck this playoff season.

From my previous post: "Take a guy like Sauer, pay him $2 mill /yr or so (I expect he gets a touch more), and then play him with your offensive zone wanderers. You will look like a genious."

Maloney is a genious. THAT is one of the best signings of the entire UFA season.

More to come as I will update this post periodically.
Posted by YKOil at 14:17

YKOil: love the work, one old-school Oilfans guy to another.

I do like that Sauer deal. It's the absolute antithesis of what Toronto did signing Finger. I have yet to decide whether or not that's the worst deal given out, or if the Caps giving Theodore over 5 million a season takes the cake.

Lots of guys left out there still - hence, lots of potential bargains and head-scratchers to come.

Thanks hbomb. Oilfans is where it all started and I always have a link and check it out from time to time.

I gave the award to the Leafs. Not just because of the signing but because it is the wrong roster move at this time for the team.