Atlanta Thrashers 2008 HRDR - by Round

Results by Round when Player was Drafted

Please reserve comment for a future post wherein I will request commentary on the review as a whole. 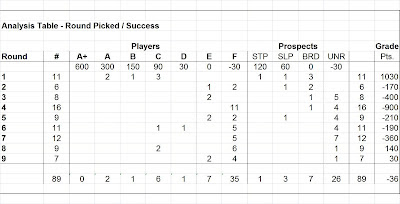 This also affects the negative scores of unranked players drafted early; let's face it - screwing up a 2nd round pick, on which the organization has spent considerable scouting resources, is worse than screwing up a 12th round throw-away pick.

The modifiers allowed for the actual results of each draft round to be measured against the reasonable expectation of each round. Thus, drafting Enstrom and Exelby in the 8th round results in that round generating a positive grade for the organization.

The following table assigns a grade to each draft round:

The analysis by ROUND serves to hi-light two other problems the Atlanta Thrashers have had: a) when only the 1st round picks are covering the bet then they ALL have to be star caliber players and b) expansion teams don't have the luxury of having years worth of slowly developing journeyman caliber prospect/players making their way onto the roster.

Think about those two points for a second.

On the first, it doesn't require a huge leap of faith to see where the pressure, for the 1st round picks to develop into 'star' players as quickly as possible, is one of the reasons why Coburn will spend the next 15 years in a Flyers uniform and not that of the Thrashers.

On the second, the lack of homegrown roleplayers is why players like Holik and White get contracts at all.