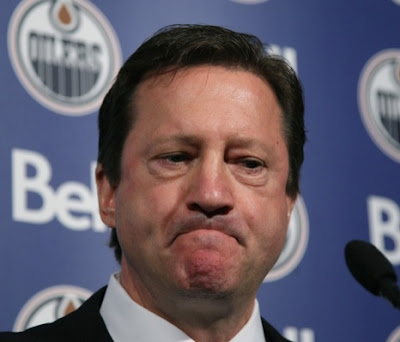 I used to live and die by the Edmonton Journal sportspage so, in that spirit, and knowing the photo is actually from there (I do try to credit where credit is known btw - though I should be more diligent in doing so):

If you were serious about rebuilding this team would you not - and I am looking at this in a RIGHT NOW kind of way:

a. Waive Robert Nilsson and, also use re-entry waivers? Basically use every avenue available until he is gone?

b. Use Cogliano and Grebeshkov in an upgrade trade? Together or alone.

Of course, one would dump any of Moreau, Khabibulin, Staois, Strudwick and Comrie first chance they got (think trade deadline).

How long would it take you to slam the door on Brule?

If you were absolutely serious about making the play-offs and you were GM of the Edmonton Oilers would you not:

b. (seriously) make a pitch to Burke along the lines of:

If you had to pick up the salary of a Wayne Primeau or a Garnet Exelby - would you blink?

IMO, Robert still being here has more to do with Kent than anything else; also, I would actually offer Pisani another contract - 3 yrs at $600,000 /year - if he genuinely wanted to retire an Oiler and I thought guaranteeing his pension was something one did for loyal, hardworking employees who didn't make a career out of taking aggressive penalties.

Which I do think is something one would do.

Have a great evening everyone.
Posted by YKOil at 18:35

What about option C) unsure or D) incompetent?

Then what would you do?

Oh, I guess that is what we are seeing right now.

Well, I did tag Lowe as incompetent once upon a time on this blog (though I think I was looking at a specific circumstance - he needed to man up about something if I recall correctly).

If Tambellini gets the treatment it will probably be more as an organizational thing than a personal one.

With Hemsky out, Horcoff operating at 80% and the team already sucking hindtit I think it silly that the team isn't looking at a rebuild option.

On Stajan: better 2nd center option than any we currently have, his FO% alone makes for a sizable upgrade at that spot. Given that most teams aren't willing to trade quality pieces, if there was a whisper of a chance a guy like Stajan was available I would consider getting him. Keeping him being a different issue.

On Comrie: guy is at the mercenary stage of his career - trade him all you want, he'll be available again soon enough.

I wholeheartedly agree with your sentiment. At this stage I don't think the playoff push should be an option. That seems like a loser move but the rebuild should be the plan. Not just on the table, the plan. The moves you've outlined are generally good, including the Pisani deal. The one thing I wouldn't do is put Nilsson on re-entry. I'd sooner buy the guy out than do that since it'll cost you less against the cap and in real dollars.

hrmmm... my understanding is that the re-entry waiver penalty is only the year it happens in - meaning that next year the Cap and budget hit would disappear.

I could be wrong though.

Anonymous said...
This comment has been removed by a blog administrator.
7 December 2009 at 05:41