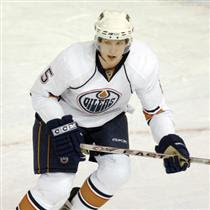 Sometimes it is a matter of time.

Lowe concludes the 2006/07 off-season with one of the most monumental cock-ups that I can imagine (Penner) given the moves previously made. This move exacerbates all the worst aspects of a prior signing (Souray) and completely destroys any semblance of a recognizable rebuild plan that may or may not have been in place after the Pronger and Smyth trades.

And so I smoulder.

This has been THE single most trying year for me as a fan of the Edmonton Oilers and that is more than a little thing. I grew up with the Oilers and the Eskimos at a time in my life when heroes were the one thing I needed most because good HAD to triumph over evil. And they did. Make no mistake of meaning when I say that the knowing of heroes is a life saving thing.

Yet here I was watching my favorite player, ever, manage my favorite team, ever, into the grave. Then Horcoff goes down.

I am a firm believer in luck AND I am a firm believer that when you set yourself up for bad things you get bad things - luck generally only serves to exacerbate or alleviate the underlying condition imo. Plainly said, this team was set-up to have a bad season. Not getting a veteran to fill in for Pisani was just... ... ... hard to describe just how stupid that is.

Yet, we destroy the Flames 5-0 and then beat the Blackhawks 4-1 and... well... management sucks donkey balls but my team, more often that not, makes me happy.

And so I am smiling.

The Oilers are my team. To them I say thank-you. It is only ever a matter a time.

I am liking that Smid is playing with a physical edge he just did not have last year. He ain't mean or nasty or even dangerous but at least he is going in fist first (motn) when out goalie's get bumped and he is standing up for himself in the scrums.

However, is he getting any better? Hard to say. He is playing with Staios again and BOTH players are taking a beating at EV. Sure, if Staios is having a bad year then maybe one can say he is dragging Smid down BUT if Smid was getting any better shouldn't be making Staios' numbers better?
Next year is make or break imo.
------