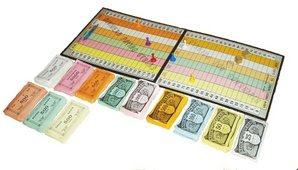 Surprising number of trades that actually make sense this year. Getting right to it.

A great depth defenseman for the price of a somewhat kind-of adequate depth forward? Wow. Typical of New Jersey to fly under the radar and snag one of the most undervalued players out there on a day like today. Great, great trade.

Getting Modano cloned for the cost of 3rd line talent is just smart asset management. Smith will have to be something special for Tampa to come out of this trade at evens imo.

Sure, they gave up talent that might actually be more than handmaidens for the great Crosbalkin... but then again... with Ottawa imploding only New Jersey stands as a credible barrier between Pittsburgh and a Cup final. Go for it.

Traded Mr. Glass for a guy who should top out as an impact player on the 2nd line. Way too much great young talent in Chicago. Sick. Smart trade. Getting the pick for Lapointe was just icing on the cake.

I may not be a big fan of the guys Atlanta got back in this trade but I can say they represent a huge upgrade in depth talent for that team. At least Atlanta got a 1st round pick back.

Added nice depth pieces at little cost. Just keeping the Oiler pick makes them a winner imo. Bergeron and Pronger have some playing history together and MAB will allow the Anaheim defense to mix it up a little.

Nice pick-ups. I don't like Stuart much at all but Detroit gave up less to get their guy than Colorado did so I see it as a saw-off. Fitting given the teams involved.

Losing Campbell hurts. Losing Briere and Drury for nothing is like getting kicked in the nads, repeatedly, during a street fight. Then, after you drag your pulp home, your girlfriend finally decides that this was night she was going in head first.

So getting Bernier and a 1st for Campbell does represent a win of sorts.

Normally I would rank this team higher but I simply don't see any character or backbone in that team at all so unless Campbell upgrades their PP to 'score every time status' they won't make the Conference finals.

I still don't think that team has the depth it needs to get the job done but at least now they have goaltending. Not picking Bryzgalov off waivers has to rate as worst move of the year.

The team needed a lot more than Lapointe. This is the team that should have gone after Salvador. Of course, if Emery or Gerber don't come through the question of, "Why didn't they get a goalie?" should get Murray canned.

Remember my my rants about Lowe putting all the risk on the Oilers? Well, Smith HAS to be a true #1 for this trade to work. No future upside otherwise. Not even a 2nd (Tampa's) for a 1st (Dallas) throw in in there. Yeesh.

Wow. Price had better be the next Dryden-Penny-Roy or this team just threw away what might have been a nice run at the Cup. Don't know what else to say. I didn't expect Ryder to stay and Huet to be gone.

That is it? A team that was sitting pretty in terms of unloadable talent and all they get for it is 4 draft picks. Not one of which is a 1st rounder. Underwhelming is the exact right long word to use in this case.

For a team on the cusp I sure didn't expect to see the impact equivalent of 'nothing' happen. Only Buffalo got worse. A team doesn't have to go after 'Smyth' every year but... well... this was outright tepid.

I like Ladd much more than I like Ruutu. Everything points to Ladd starting to put it together while Ruutu is one trip out for ice-cream away from a career ending injury. This one will backfire on Rutherford.

Hey. I wanted this team to pick up some cheap talent and apparently it was out there in spades. Heck, Lapointe would have been a nice 3rd line pick up and for the cost of a 6th who cares?

Sure Howson got some nice assets but his team is deficient in leadership and skill again. Columbus still has long ways to go.

EDIT TO ADD: One thing to note - I do like the fact that Howson is fully cognizant of the shortcomings of his team so kudos to him - unlike Lowe he KNOWS a rebuild is all about bottoming out and retaining your picks while doing so.

Losing two defensemen, neither being an oldie, for peanuts won't help. Davidson has to be secretly hoping for a free-fall in the standings.

Another year of Luongo's career is now, probably, gone. All Vancouver fans can hope for here is that it is addition by subtraction.

Slats and Gretz trade maybe's. Slats got more of them and Sjostrom is, already, a borderline NHL'er so I give Slats the benefit of the doubt here.

Maybe Montoya will be a player? Meh. Hossa, however, has some nice underlying stats and they say this might yet be a winner. Always the possibly of a brothers act being in play as well so look for the conjecture to start yesterday.

After being the marquee on the sportschannels all month the trades, for what they were, were completely 'meh'. Losing Gill should hurt. Good.

Better have a great off-season. Like an episode of Friends. Please, free JB already. What did he ever do to deserve that team?

Yet Another excellent post. Agree for the most part.

With regards to LA - Blake and Nagy were the only other UFA's. I'd imagine LA wants to keep Nagy for another year, and Blake didn't waive his NTC.

Edmonton - honestly, I don't see any purpose in getting a Lapointe with 18 games left. A veteran player should have been acquired well before this stage - might as well keep the 6th and hope you can land another ''Kyle Brodziak''

Likewise, Columbus was in a sell mode - why not trade Vyborny and Peca along the way?

Montreal a big loser. I just don't see the logic of acquiring a late 2nd round pick for a guy who has been your number one goalie throughout the year. I like Price, but what happens if he falters in the playoffs? Or injury? There's Halak, but too small of a sample size.

Yeah, while I agree that a 6th basically has no value, I'm not sure Lapointe would really help.

Our kids have not been the problem lately, nor has our 4th line. Where's he gonna fit? Who else do you think was out there?

And I have no idea what Gainey was thinking. Price may very well be the next coming of Dryden, but that's a big risk. Right now, his stats and experience are clearly inferior to Huet. They should've picked up Roli for a prospect, I think.

For me, I look at the fact that a 6th and a 7th would have gotten the Oilers a proven (albeit fading) veteran wing and a less proven (but still 170+ games played) defenseman.

This might make for as much as a 2 to 4 point swing in the standings for the Oil - so for little cost Lowe denies Burke a lotto pick.

Worth it for me.

I really rate both Salei and Halpern, so I'd score both those teams a bit higher.

I also think that Howson had a good deadline. That team looks good going forward, but realistically didn't have a good chance at the playoffs anyways. Moving the useful pending UFAs just made sense. And Vyborny is a very underappreciated player I think, he was wise to hold onto him.

The headscratcher for me is the San Jose deal. I mean I know that Bernier isn't blessed with a great attitude, and I've heard Wilson swipe at his weight control issues in a podcast, you could sense the frustration. Still, he has talent and size, and he's still very young. It would have been an overpay without the first round pick IMO.

The lesson that both San Jose and the Islanders have taught everyone is that when you load up on offensive defensemen ... you don't end up with as much offense from the back end as yuo thought. And a lot of other bad things happen. Adding yet another just makes no sense. I'm wondering aloud if both S.J and NYI have subscribed to Mike Smith's methodologies. They both have made terrific moves with forwards, and puzzling moves with defenders.

Columbus is an interesting team to be sure. Howson DID make the right call in trading the guys away - my big issue really is that what he really needed was prospects only a year or two away - not draft picks that were 3 to 5 years away.

I will post more on Columbus later I think.

I do think Buffalo was right to trade Campbell as well - career yearitis right there imo (at least while he was with Buffalo). Problem is that Buffalo is slowly losing every player that, combined, made it a formidable team.

San Jose... picking up Campbell = good. Not trading another guy away for a physical difference maker on defense = bad. There is nothing on the San Jose roster worth being afraid of and so no one is. Bernier could have been that guy but he is a year or two away.

Put Glencross, Brodziak and Stortini on that team, the way those three are playing, and San Jose is on its way to the Cup final imo. As it is - 2nd round knock out at best.